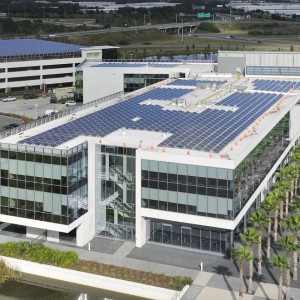 Tri-City Electrical Contractors received a 2012 ABC Excellence in Construction Eagle award for  a 1.1 megawatt solar system installation at Darden Restaurants Restaurant Support Center (RSC) in Orlando. The project was completed in partnership with Solar Project Developer/Builder, Kenyon Energy. Representing the largest private rooftop solar array in Florida, the system will generate enough power to subsidize 15 to 20 percent of the RSC’s annual usage – the equivalent of taking the campus off the power grid for nearly two months.

View more about this project at:

“Harnessing the power of the sun is a smarter way to fuel our operations at our RSC and complements the other sustainable elements that make up the design of our headquarters facility,” said Drew Madsen, president and COO of Darden Restaurants.  “It allows us to diversify our power source and lower our energy costs while helping ease the burden on the community’s supply of power, lessening the overall strain on the electric system on hot Florida afternoons.”

The solar installation is expected to produce up to 1.9 million kilowatt-hours of electricity per year, equaling the average annual energy usage of approximately 163 homes while reducing carbon emissions by more than 1,300 metric tons annually.

The total system uses over 4,400 Solar World 250 watt panels with the majority of panels (3,326) located above the 4 story parking garage on a custom steel canopy that incorporates live vertical panels on the South, East, and West facing fasciae; concealing truss webbing and maintaining the overall visual appeal of this facility, while generating electricity.  The balance of panels are located on the main building roof at a 15 degree tilt using a fully ballasted racking system.  The entire installation, including canopy construction, was completed within the mandatory 90 day window of time and within budget.

The Darden RSC campus opened in September 2009 and is the largest building in Florida to receive Leadership in Energy and Environmental Design (LEED) Gold certification for New Construction (NC). It includes a number of energy-efficiency features, including an all-glass exterior that lets in daylight, but not heat; a U-shaped floor plan that limits western exposures; motion sensors to turn off lights in vacant rooms; and a “daylight harvesting” system that monitors natural light levels and automatically dims artificial lighting as appropriate.